Learning From Our Past 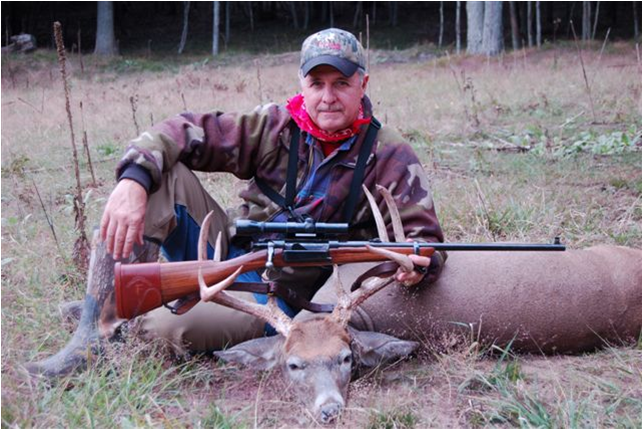 I’m old fashioned. I still hunt with a Winchester pre-64 model 70 in 30-06, topped off with a 1960’s Weaver K4 scope. My wife, Kathy, bought me for Christmas, a Remington model 721 bolt action in .270 with a vintage 2.5-7 Weaver scope on pivot mounts. It shoots like a dream. Both rifles date back to 1953. But as ole Clint Eastwood said, “A man’s got to know his limitations.” So, as accurate and tough as the old scopes may be, they do have a weakness compared to new scopes. During the last few minutes of legal shooting, the older scopes won’t gather as much light. But it’s close, so it works for me. I am not opposed to new guns and new scopes…..far from it. On all of my unguided hunts in Alaska, I carried and still do, a Winchester model 70, built in 1988, in a .375 H&H magnum with a 1.5-5 Leupold scope. So I do like modern guns, if 1988 is modern. Now you ask yourself what in the world does this have to do with food plots? Well just stay in the saddle.

Last winter I had the great honor to hunt at Legends Ranch in Michigan, owned by Skipper Bettis, with my best friend Dr. Steve Vogt from Orlando. It was also my first guided hunt ever. Skipper Bettis, an ex-lawman from Texas, runs a first-class outfit with food and lodging that will spoil you. The first day there everyone (16 of us) sighted in our rifles. Of course the most expensive and modern technology was unleashed. But when I unzipped the worn canvas Boyt gun case and brought out my old 30-40 Krag sporter topped off with a side-mounted 2.5 fixed Weaver scope, folks started staring. “What the heck is that?” asked one of the young guides. I said, “It’s what Teddy Roosevelt’s boys whipped the Spanish with in Cuba.” After everyone handled the old gun I proceeded to shoot a 1.5- inch group at 100 yards. Ain’t bad for a rifle built in 1897 with a 50 year old scope.

My point…..sometimes it’s good to go back in time to see what Dad and Grandpa did in order to learn and evaluate the present and plan for the future. And sometimes, more often than not, Dad and Grandpa were right!

I travel a lot. I speak to thousands of outdoorsmen throughout the South representing Tecomate Seed. I also hear from hundreds of outdoorsmen reflecting their concerns. For example, I can’t began to tell you how many hunters are turning away from hunting shows because they, like me, don’t like rock-and-roll music mixed with the beautiful outdoors. It doesn’t mean they don’t like rock-and-roll…….just not mixed with the beautiful outdoors. They are also tired of the same old tree-stand scenes…..”Hey, here comes one now,” as a 160-inch buck is drilled. You see it ain’t reality for most folks. So many hunters would be lucky to see a buck like that, much less shoot one without paying a hefty price for it. And there’s nothing wrong with that either. Now with saying that, it is very possible to shoot a great buck on your property if proper nutrition and sound management is practiced, not only by you, but also your neighbors. Many of the hunters I speak to enjoy seeing pictures of game shot with my old rifles. Let me tell you about one right now.

I am building a custom rifle for my grandson Sam Railey….he is 10 months old. It’s a WWII Japanese Arisaka model 38 carbine in 6.5 Jap. I attached a Williams receiver sight so one day he will get a physics lesson. Now I will also attach a scope later, but in 10 years he will learn to properly shoot a rifle and understand windage and elevation. Sadly, this is becoming a lost art. How many rifles today come with iron sights? Darn few.

I am a proponent of medium-velocity bullets. In Dr. Kevin Robertson’s book, “The Perfect Shot,” he says, “All of you who have read the exploits of Africa’s old time big game hunters will realize that a number of calibers, ranging from small bore to some of the largest elephant stoppers, have developed excellent African reputation over the last 100 years or so. Out in the field, their performance on all species of game animals is far better than their factory stated ballistic properties suggest. Have you ever wondered the reason for this? I have.” He goes on to describe a bullet’s sectional density and why some bullets out-perform others. Now make no mistake, you can cleanly kill game with a 300 Win. mag., or various short mags. But you can also cleanly kill the same game with a .270, 30-06, 30-40 Krag, or yes, a 6.5 Jap. It all comes down to one’s preference.

I spent 30 years in the agriculture chemical and fertilizer business as a salesman and branch manager for Helena Chemical. I’m a certified crop advisor and agriculture is dear to my heart. So is hunting. I went to work with Tecomate a year ago and my goal is to blend sound agriculture science into the food plot industry. No new chemistry is introduced into agriculture until sound research is performed at agriculture colleges. For many years, marketing has led the food plot industry and that’s fine. But sound, proven science is absolutely necessary to forge a long future whether selling the American farmer or the American outdoorsman.

Barenbrug, the owner of Tecomate Seed, has always promoted science over marketing thus making them an extremely successful seed company. Through Barenbrug, Tecomate receives many technology advancements not found in other food plot seeds. Advancements can include tolerance to drought, faster germination and establishment and disease resistance. These advancements come through improved genetics, selection and the Yellow Jacket proprietary seed coating. Seeds are also selected and sold in the respective geographical areas for optimum performance and palatability.

As the Southern Manager for Tecomate, I have spoken to thousands of outdoorsmen and have met many new friends in the industry. Tecomate’s business is growing due to us promoting sound science. For many years food plot designs have been long, finger-like food plots. Consequently, there is not enough sunlight/photosynthesis to raise a quality food plot providing the nutrition required.

We are increasing these old food plots to larger two and three-acre food plots/patch farms. I show pictures in my presentations of before and after food plots that now produce much healthier plants, more palatable able to withstand much more browse pressure. There is a down side: you will spend more money on a bulldozer, lime and fertilizer.

The difference between a long, skinny, quarter-acre, shaded food plot,to a two-to- three acre patch is undeniable. Your goal is to think more like a farmer on a small tractor than a hunter on a four-wheeler pulling a chain to incorporate the seed.

Shade, low ph, and poor seed selection is your enemy. Select a premium seed that is treated, drought resistant and geographically selected for your area. And yes, we would like for you to choose Tecomate. There are other experts out there in the seed business……pick one and do it right like a farmer feeding his family.

There is another key to promoting a healthy deer population and that is native vegetation. Col. Jerry Brown in Alabama and Glen Garner at Foxworthy Outdoors, both good friends of mine, have made a believer out of me that native vegetation is as important, or more important, than food plots. Joel Glover, a very well-respected wildlife biologist with the Alabama Department of Conservation serving as a regional private land biologist with the National Resources Conservation Service, has also convinced me of this. You have to manage native vegetation through proper burning, thinning of timber, and promoting warm season grasses. I am a very strong proponent of crop rotation in food plots. Any good farmer practices crop rotation, and the same holds true for food plots. This spring, try planting Lab Lab Plus from Tecomate.

This product contains Lab Lab bean, Butterfly Peas, Ebony Peas, Hinson Soybean and White Milo, along with Cowpeas. You have five legumes (these are products that fix nitrogen in the soil,) in a bag. The product is great for all wildlife, including quail, and helps rebuild the soil ahead of your fall food plot. Four weeks before you plant your fall food plot, mow and disc the Lab Lab Plus in. This fall, plant something like Max Attract or Greenfield Pro.

Am I saying you have to choose Tecomate seed to shoot a large buck? No.

Does Tecomate provide one of the best seed mixes in the industry at a competitive acre price? Absolutely.

In the South, our forefathers had patch farms all over the countryside. Cotton was the cash crop, but they lived on one acre of peas here or a half acre of beans there. There were patches of corn to feed the horses, mules and milk cows. There were also a lot of quail because of this. Pine trees and folks leaving the farm have forced patch farms almost into extinction. Now, I am not against the timber business. All I’m saying is that we need to try to mimic patch farms on our properties.

Col. Jerry Brown, a Vietnam veteran who runs Lake Martin QDMA in Alabama, has mastered this old time farming technique and I am attempting to do the same on my small farm. Jeff Foxworthy’s Pine Mountain, Georgia property is a prime example of what beautiful Southern farmland can look like. Glen Garner, his manager, has blended agriculture with food plots in a professional way, leading to great success.

In upcoming articles with Foxworthy Outdoors, we will be talking more about spring food plots. So be sure to keep an eye out for those.

By the way, after learning I still shoot a Bear Whitetail 2 bow, Glen Garner and the gang at Foxworthy Outdoors shook their heads and told me that it would be like throwing a spear compared to new archery technology. Well……..dang it……..they were right! You see, I’m not an old fossil after all. May God bless you, your family and our country!