Walking Across Alaska: Boys and Caribou 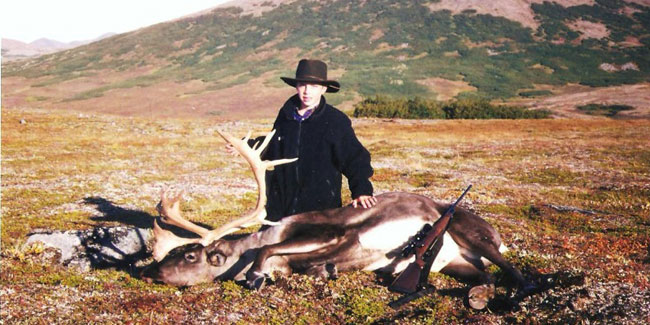 “He’s not too far – you shot over him.  Now take a good breath, let it half out and squeeze……easy like,” I replied.

Josh’s Dad and my best friend, Dr. Steve Vogt, was lying on the other side of the boy and said, “It’s OK Josh, just squeeze the trigger.”

I quickly said, “Son, shoot this caribou while he’s still in this area code.”

I looked at the boy and holy cow, what a bloody face!  He had a deep cut over his right eye and blood was pouring in his eye and down his face.

“Dad gum boy,” I said as his Dad tried to clean his face and eye.

Unbelievably as it sounds, the bull was prancing back and forth at 150 yards with six cows wondering where that clap of thunder came from.  The scope had made a deep cut on the boy’s face and his Dad and I were desperately trying to get him cleaned up while all of us were lying prone on the Lake Illiamna tundra.

I said, “Alright Josh, back off that scope a tad and let one fly.”

His Dad added, “Easy Josh…..steady son.”  There was utter quietness for several seconds.

I watched through my old Bushnell 7x50’s as the 7ml-08 barked.  Rainwater exploded off the shoulder of the bull.  The 140 grain pointed soft point hit the bull just behind the right shoulder.  The caribou staggered like a drunk for 15 feet, then crashed to the blueberry covered tundra.

“Man, what a shot!” my son Steve said, who was lying down behind us.

Josh had a grin that would make a persimmon-eating mule proud!  We took pictures and slapped the boy on the back while he jammed a wadded up piece of toilet paper on his right eye.  I couldn’t help it….I started laughing.  I know it’s not funny, but I couldn’t help it.  His Dad started to laugh too.  What the heck, the boy played hurt.  He hung in there and didn’t wimp out.  He managed to harvest a Mulchatna caribou bull hundreds of miles from civilization and without a guide.  Not bad for a young teenager.

Dr. Vogt and I had made numerous unguided trips into the bush.  We had several extremely close calls.  You are always taking a chance every time you go.  It’s why I love it. It’s a spiritual cleansing to stand on a tundra mountain viewing the world around you.  I remember starting each adventure as we load our gear into one of Alaska West Air’s DeHavilland Otter or a Beaver.  The old rugged planes with their huge radial engines are the work horses of the bush.  You are always a little nervous, even dry mouthed.  You see, you’re not sure you’re coming back.  Make no mistake, it cannot compare to a soldier going to war, but statistics prove you can get killed in the wilds of Alaska, Africa and other remote parts of the world.  It’s Alaska…it’s the way it is.

Later on during the trip, Steve, my fourteen year old son, and I spotted a small herd of caribou on a mountain range three miles away.  It was early in the morning and we were finishing our oatmeal when we spotted the animals.  We threw on our back packs, slung our rifles and off we went.  Steve was carrying a Remington 700 mountain rifle in .270 and I had my ‘old faithful’: A worn Winchester model 70 in 375 H&H magnum.  Both rifles were topped off with Leupold scopes.  The .270 had a 2-7 and my big bore had a 1.5-5.

The walk was long.  I was hurting.  Four weeks earlier I had knee surgery.  The walk across the tundra in our hip waders gradually went uphill as we started up the small mountain.  Steve and I began to whisper the closer to the top we got.  Cautiously we cleared the top and immediately three caribou raced from our right to left, I mean like shot out of a cannon.

Excitedly I yelled, “Son, take a good lead on that bull and……..”

Boom!!  Steve’s .270 bellowed and I kid you not, the bull did a complete somersault, end over end….instant kill!  I looked at my son in disbelief and said, “Dad gum, son!”

Steve started speaking in tongues.  I couldn’t understand a word coming out of the boy’s mouth!  The boy checked his safety and ran toward the very dead bull.

“Wait for me Steve,” I yelled while hopping behind.  “Careful son,” I hollered.

We hovered over the fine bull, patting and admiring him.  The 150 grain Remington round nose soft point hit the bull on the left side of the neck and there was no exit wound.

Now you may ask yourself, “Skill or luck?”

Well, it didn’t matter….. he made a great shot – the shot of a lifetime.

The two of us took our back packs off, came out of our jackets, rolled up our sleeves, and went to work skinning the bull and placing meat in bags to be packed back to camp.  Father and son worked alone for an hour on top of a remote mountain, using our skinning knives to dissect the bull.  It was a time we would remember the rest of our lives.

Dr. Vogt and Josh came along and helped us pack the meat back to camp.

Along the way, we flushed several coveys of ptarmagin.  Ptarmagin are basically ‘souped-up’ quail, brown in the summer, white in the winter and taste delicious.

As we toted our meat to camp, Dr, Vogt said, “Scott we need to come back and shoot a mess of these ptarmagin for supper.”

Josh said, “Are ya’ll going to shoot them with pistols?”

I replied, “Reckon so,”  the whole time grinning inside because my buddy Steve may be the best rifle shot I’ve ever seen, but he’s also an awful pistol shot.  We got to camp, unloaded our gear and meat, then ate a quick lunch.

“Let’s go shoot ptarmagin with our pistols,” I said.

Steve Vogt looked at me with contempt.  We buckled our six shooters on and went off in the direction of the ptarmagin.  You see, I was carrying a secret; I had loaded my Ruger Bisley 44 magnum with rat shot.  It makes a pistol like a weak shotgun.  Dr. Vogt didn’t know about the rat shot….. I didn’t want him to know, especially in front of our sons.  The first bird flushed in front of me real close and I shot him out of the air.  He fell 10 yards in front of me.

Josh yelled, “Dad, did you see that?  Mr. Scott is a great pistol shot!”

The second bird flushed and I shot it down like the first bird.

Josh again excitedly yelled, “Wow, Mr. Scott I can’t believe you can do that with a single bullet out of a pistol.  “He’s a great shot, isn’t he Dad?”

I couldn’t stand it any longer.  I opened up the loading gate of my revolver, pulled out a rat shot cartridge, walked over to Steve and slapped it in his hand.  Vogt looked at it, then at me and firmly said, “You’re terrible.”

I shared the rat shot with him and we shot more ptarmagin.  That night, we had the best ptarmagin and rice….much better than anything you would eat at Cracker Barrel.

You see…..memories like this with your son or daughter cannot be bought.  They are not for sale….you earn them.  Time spent with children, your wife, or an aging parent paves the way to sweet memories.  Time is also fleeting….it steals from you if you spend if foolishly.  I don’t mean to preach to you….heck I’m no angel.  I have scars just like you….none of us are perfect, but I tell you now…..get your priorities in order.  Personally for me….God is first, my family is second, my country is third and I am fourth.  Make no mistake, your children won’t remember fancy gifts, but they will remember walking in the woods with you, learning to shoot, or catching a bass together.  They remember time spent one on one.

I haven’t been back to Alaska in several years.  But sometimes in the still of night, in peaceful sleep, I find myself walking across Alaska.  I can see the big white swans in flight or hear the ghostly sounds of the tundra and see the magnificent beauty of the mountains.  But always, I see my son Matt grinning as he reels in an Arctic greying or Steve’s wide eyes as the DeHavilland Beaver rumbles off the lake and roars into the sky.  Then in my sleep, I smile.

May God bless you, your family and our country.