Walking Across Alaska: The River, Part I 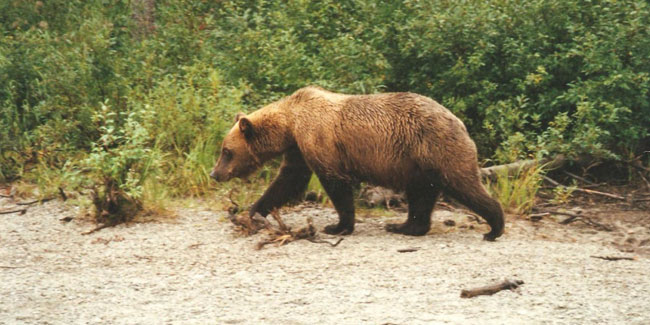 September 19, 1989, at 4:30 a.m. – My dad was driving me to the Orlando International Airport to catch a Delta flight to Anchorage, my first trip there.  I left my truck at his house to keep from paying two weeks of parking at the airport.  Dad unexpectedly pulled his car over about a mile from the airport and looked at me with eyes of concern.

“I’ll be back in two weeks, dad.  I’ll be fine, I promise you,” I said reassuringly.

We drove on and met my best friend, Dr. Steve Vogt, at the Delta curb.  We each unloaded one duffle bag and a gun case.  I put Dad’s concerns in a corner of my mind and looked on with great excitement as we took off for Alaska.  Thirteen hours later, after stopping in Salt Lake, we landed in Anchorage.

A funny thing happened in the airport at Anchorage.  Now you have to remember that this is in 1989.  We rolled out our sleeping bags in a corner of the airport to catch a few hours of sleep before being picked up by a guy we were renting equipment from.  He would drive us to a different airport in the morning, where we would catch a flight to Twin Lakes – the head waters for the Chilikadrotna River.  Well, I was sound asleep in my bag with my legs propped over my duffle bag and gun case, so I’d feel any attempt to steal my gear.

For some reason, I had a strange feeling…heck, someone was watching me.  I opened my eyes and in the semi-darkness I saw a pair of dirty old tennis shoes about three feet in front of my face.  They belonged to a dirty old hippy who was standing over me staring at my duffle bag.

Angrily I said, “What the heck do you want?”

He jumped a foot off the ground.  And then to add to his surprise Steve stepped out from around a column, where he had been watching this fellow, and said, “You’re fixing to be in a world of hurt, man.”

The old scoundrel took off and we never saw him again.  Heck, we didn’t even report it.  I had a hunting knife on my belt.  Steve did too.  Like I said, it was 1989.

Now let me explain; we were getting ready to embark on our first unguided hunting and fishing trip in Alaska.  You see, we were ready…….we read a book first!  That’s us….graduates of the Correspondence School of Alaska Hunters.  Heck, you have to start somewhere and we did!

We read Christopher Batin’s book on hunting unguided in Alaska.

Now, both Steve and I grew up hunting in Florida as kids.  We were avid outdoorsmen.  We made numerous trips to Montana, so what could be so tough about Alaska?  Wow, where do I start?  Number one...cotton kills; so does goose down.  Leave your boots at home, only hip waders here, and so on and so on.  We’ll cover more about that later.

Anyway, the next morning, we caught a twin engine plane from Anchorage to Port Alsworth with all our rented gear.  The trip was real bumpy.  I was half sick when I landed there.  We then loaded up in a 182 Cessna on floats and flew on to Twin Lakes.  Folks, I’m telling you……we flew over and around the most magnificent mountains until Twin Lakes appeared...I was stunned and speechless, to say the least.  I was looking at what had to be the most beautiful spot on the earth.

We settled down on the lake that fed the Chili River and idled over to the shore.  The plane’s engine made its last rotation, then utter quietness - almost deafening.

Like a kid at Christmas, I opened the door of that puke wagon and jumped onto the starboard float, hopped in the lake up to my knees and waded to shore, helping the pilot secure the plane.  Steve and I unloaded our gear on shore, shook hands with the pilot and watched the little Cessna motor away and take off for Anchorage.  The little plane disappeared over a mountain and Steve said, “See you in two weeks, a hundred miles down-river, Jack.”

We just stared at God’s beautiful creation – I can’t explain it – there are no words.  Again, the deafening silence was almost haunting.  Slowly as our brains flushed out noises of cities, cars, planes and people, our sense of smell heightened to that of a primitive man.  I then realized that the land was not quiet at all, but was alive with noise.  It was alive with sounds I had never heard before, and to this day, I’m not sure even after nine unguided trips, where some of the moans of the mountains, tundra and rivers come from.

It is a sound so beautiful, but lonely, that is haunting.

For several minutes we said nothing.  I replied, “Dad gum, this is like another planet.”

Two beautiful swans, like white B-52’s, flew on the other side of the lake with the mountain silhouetting them.  I could see sheep on the tops of the distant mountains.  Then, from nowhere, our marveling of Twin Lakes was interrupted.  I heard heavy footsteps behind us.  I whirled around, suddenly remembering that my Ruger 45 Long Colt with a 4 ¾ inch barrel was not on my hip.  Would you believe it…..400 miles from nowhere, and a game warden walked up on us?  He laughed out loud noticing the shock on our faces.

Steve said, “Where in the world did you come from?”

He replied, “I’ve been following you boys for over a 100 miles in my plane, and knew you were probably headed for Twin Lakes.  I landed in the next cove behind you.”  Then he said, “Now let me see your hunting license and tags.”

Well, we both showed him our licenses and tags and he was happy.

I said, “You’re not from here……you’re from the South.”

He said, “Yep, from North Carolina.”

We struck up a friendship with this gentleman and he stayed with us and talked for 30 minutes before walking back to his hidden Super Cub.

Steve and I unloaded our gear, pumped up the raft and prepared to row across the lake.  But before getting into the raft, I first tied on a Mepps spinner on my Dad’s old fiberglass spinning rod.  I had just rebuilt the old rod with new eyelets.  I had an old Shakespeare 2062 spinning reel with 10 lb test line and cast the little spoon out into the late.  First cast, I caught an Arctic grayling.  Steve followed suite and reeled in a large lake trout with his first cast.  We now had our supper.

We still had four hours of daylight left, so we started the long row across Twin Lakes and towards the great Chilikadrotna River.  Halfway across the lake, Steve pulled out a plastic cup from his backpack, leaned over and filled it from the lake and handed it to me.  I took several good swallows….my gosh…..clean and cold, like no other water I had ever tasted.  The closer we got to the headwaters of the Chili, the louder it got.  Then I remembered the pilot’s warning: “Be careful down there.  It’s the highest rainfall we’ve had in ten years.”

I handled the raft into the entrance of the Chili, like being sucked into a vacuum cleaner….we were on a roller coaster and we were gone!  When I say it was a fast river, it was hot.

I kept the raft in the main current and away from the big rocks and the bank. It was a job.  I realized immediately, this wasn’t a class 2 river like it was supposed to be.  After about 20 minutes, it eased up a bit.  As we went around a bend, a huge Alaskan moose appeared on the right side of the river carrying at least a 60-inch rack.  Let me explain something though, in Alaska you can’t hunt the day you land.  It’s not fair to the game you may have spied from the air.  And I wasn’t sure I was out of the no-hunting zone that surrounded Twin Lakes.  We drifted by the magnificent moose who spooked and crashed through the trees like a fullback.

Steve said, “Dad gum Scott, can you believe it?  We’re both going to shoot a moose and a caribou on this trip!”

We fought the river another two hours and made a decision not to flirt with this great river in the dark, so we made camp.   I rowed hard into the shallows and the gravel bank as Steve jumped out and secured the bow of the raft.

We then prepared for camp.   I pulled out the tent, and my gosh…it had to be a $19 special or some garage sale pick up.

I said, “Steve, this tent is not much thicker than toilet paper.”

A few minutes later Steve said, “I can’t get the Coleman stove to light, the fuel line is rusted solid.  I’m going to kill that guy we rented this mess from.”

I put a tarp I had brought with us under the tent and another one inside.  We then ate our fish over a driftwood fire.  We stayed up drinking coffee around the fire for a couple of hours and laughed about the cheap gear we had rented.

The Alaskan moon had a yellow tint to it and I swear I think I could have hit it with a rock – it looked so close.  The cold ran us into the tent and I climbed in my Coleman Peak sleeping bag made of hollofil.  My Ruger 45 Long colt rested at my right side.

Steve said, “Scott, did you see the size of that bear mount in the Anchorage airport?”

I said, “Yeah. We would be in a real storm if a bear like that got in our tent.”

“Dang,” Steve said, “We’d have no chance against a monster like that.  Steve then asked, “How would you handle it if a bear like that broke into the tent?”

I said, “I’d take my hunting knife, cut a back door out, shoot you in the leg and run.”

We both cracked up!  Soon the talk got slow and before I drifted to sleep, I prayed for God’s protection on me and my buddy, but more importantly, for Him to protect my children back home while I was away.  I also asked Him to ease the mind of my father.

Then I listened to the beautiful music of the river as it moved through the rocks.  A beautiful river, a dangerous river...then sleep came.