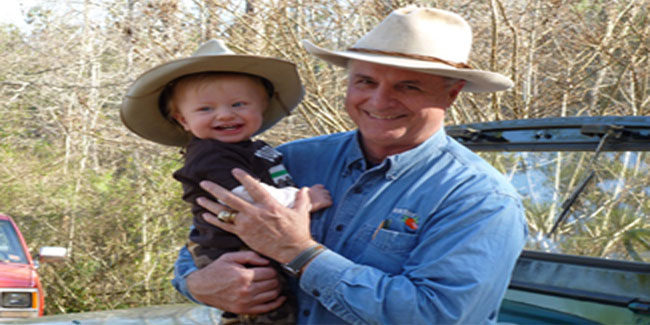 Have I told you I have a grandson? Well…like so many older folks who like to brag about their grandkids, I guess I’m now one of ‘em. Sam Railey will be 2 years old this coming January. I know this sounds a little premature, but I’m building Sam a rifle. I know he’s only two, but the boy is going to need a rifle one day. It makes perfect sense to me that I continue the great outdoor experiences that I had with his Dad, Matt and his Uncle Steve, my other son with Sam. As a father and grandfather, it is a special time to present a young boy with his “first rifle.”

Well let’s see…Matt’s first rifle was Winchester model 70 bolt action in .257 Roberts. My other son Steve’s first rifle was a Remington 700 mountain rifle in .270. You see, a young boy or girl has limits on what they can handle without developing bad habits like flinching. Let me add that safety issues are paramount.

Shooting wild game over the years and witnessing others do the same brings back great memories and experiences. Let me give you an example: I’ve killed wild hogs in Florida with a .44 magnum as well as a .22 long rifle. Now, I don’t propose killing a wild hog with a .22 rifle, but it can be done. I’ve dropped a 1,800 pound moose in Alaska with a 375 H&H magnum, but I’ve seen others do the same with a 30-06. I’ve seen bullets cleanly take game which published ballistic reports would debate me over their performances.

As you may know, the short mags are becoming extremely popular and that’s fine…many of them are great cartridges. All I’m saying is I have killed caribou, antelope, deer, elk as well as Alaskan moose with medium velocity cartridges. Great examples of these cartridges are the .270, the 30-06, .257 Roberts, and the .308. In Michigan, I killed two heavy-bodied whitetail bucks with an old 30-40 Krag sporter.

Now hold on, I’m not against new stuff. All I’m saying is that some of the old technology will hammer a caribou in its tracks, or drop an elk with one shot. A lot of these old cartridges have been successful due not only to their medium velocity, but also bullet choice and placement.

So let’s talk about Sam’s rifle. Last winter I was drinking a cup of coffee with my wife Kathy. We were outside one night sitting in front of a fire ring at the farm. “Kathy, I have a confession to make and I feel kind of bad about it,” I said.

She turned that pretty blond head toward me and said, “Say what?”

I replied, “Well baby, I bought a new…old rifle.” I proceeded to tell her about a Japanese model 38 carbine in 6.5 Jap.

Dang, she didn’t get mad and was actually interested in hearing more. Folks you see, the 6.5 military cartridge from WWI was a phenomenal cartridge and was actually used up until WWII. As hunting round, they were legendary, especially one – the 6.5-54 was a Greek military cartridge that was actually used in the Mannlicher sporting rifle. Ernest Hemingway and Karamojo Bell made the little rifle famous. In this same family you have the 6.5 Swede, the 6.5 Carcano and yes, the 6.5 Jap. There are three great things I like about the cartridge: (1) they are extremely accurate, (2) they have an enviable record of deep penetration on big game due to their sectional density combined with medium velocity, and (3) they produce very low recoil – which for a 10- to 12-year-old boy or girl, makes it a great choice.

Now I hear the critics hollering, “Now where in the world can you go buy a 6.5 Jap?”

Well, you can buy the 6.5 Swede commercially, and the .260 Remington as well. In one of Jack OConnor’s (the father of the .270 Winchester) books he praises the .270 but he also discusses the many deer killed instantly by his wife using a .257 Roberts. You see, they are all very similar cartridges. It has come under my observation that the 25-27 calibers at medium velocities become deadly little bullets. There is no substitute for bullet placement and proper bullet choice. I witnessed Dr. Steve Vogt shoot a caribou bull on one of our Alaskan hunts with his 300 Win mag. At the shot, I saw rain water explode off the bull. The bull looked around wondering where that clap of thunder came from. He trotted off a hundred yards and fell, stone dead. We examined the bull and noticed a clean entrance and a clean exit wound which told the story. You see, the bullet zipped through the animal using little of its kinetic energy.

The next year, Steve went to a heavier 200 grain bullet, and the next bull shuttered when shot, took four steps and dropped, also stone dead.

Now Sam’s rifle is a true military rifle that has been sporterized. It has a 19-inch barrel that is cradled by a beautiful maple, full stock (Mannlicher style.) I replaced the heavy military trigger with a Timney trigger system and safety. The old rifle is topped off with a vintage Weaver 2.5 fixed scope on Weaver mounts. It has a finely checkered steel butt plate and heel cap. I also attached a Williams aptature site (peep) to the rifle that can be detached and carried as a back-up if the scope is damaged.

Now I have had some folks say, “When was the last time you had a scope break?”

Well, I’ve seen it happen many times. Darn, I had a horse roll over on me in the Bob Marshall Wilderness in Montana and didn’t scratch my rifle or scope, but one hour later, the same spastic horse kicked a buddy’s horse behind me and broke his Weatherby stock in half as well as the scope. So it does happen, you see.

I want Sam to have a vintage rife and scope. I also want him to learn how to shoot field sites. I want him to practice shooting his rifle without it punishing him. I want him to have a very special, first rifle….one from his old Grandpa. You see, one day, God willing, I want to walk again on top of a tundra mountain in Alaska, surveying the landscape like we were the first to see it. To spot caribou, then stalk them and watch Sam as a young boy make a small step in becoming a young man. Hunting does this. A boy hunting with his Dad does this, and that same boy with his Grandpa…well, that’s special.

Sam and I will have great days afield shooting game and camping in great wilderness areas. And you know, for some reason watching game shot with a short mag compared to watching a 156 grain soft nose leaving the barrel of a military rifle made in the 1930’s…well, that’s special too.

But hang on. A buddy drove to our farm all excited, bringing with him a new Remington 7 mm mag. It had a black/gray synthetic stock, no field sites, just a new Leupold 3-9. We walked to the bench, and I fired three shots downrange. Wow, was I impressed! A more accurate rifle may not be found.

You see, there is a place for black stocks and stainless barrels and the trend is going in that direction. I have to admit, that the Remington my friend brought over would make a perfect hunting rifle and now I just might have to have one. My daughter Elizabeth wants a new hunting rifle and one of these new Remington’s may just fit the bill. Well, sometimes I do like new stuff!

As the sales manager for Tecomate Seed, I speak to thousands of outdoorsmen each year discussing the advantages of Tecomate. Somewhere along the way we always migrate to the discussion of rifles and it becomes clear that most share the love of blue steel and burnt gunpowder.

For me personally, there is a special place in my heart for the 6.5. You see, in 1942 a young man left his home and wife in Alabama and went to war. This young man witnessed death and destruction in places like New Guinea, The Philippines and he drove an army jeep into Hiroshima a few weeks after the bomb. The young soldier returned home three years later after serving his country. He brought home more than memories. He brought home a Japanese model 38 bolt action rifle in 6.5 Jap. The young soldier is my father, JD Railey. He is a Christian, a Southern gentleman, a patriot, a loving father and grandfather. He is also my hero.

At least once a year I pull my Dad’s rifle out of the safe, go to my shooting bench and send a few rounds downrange. It brings back great memories…I think of my father, and I think of the rifle and the stories each could tell.

One day many years from now, Sam will shoot his 6.5 Jap sporter and remember days spent in the woods and remember the smell of a canvas tent mixed with smoke from a campfire and then he will smile and think of his ol’ Grandpa.

May God bless you.