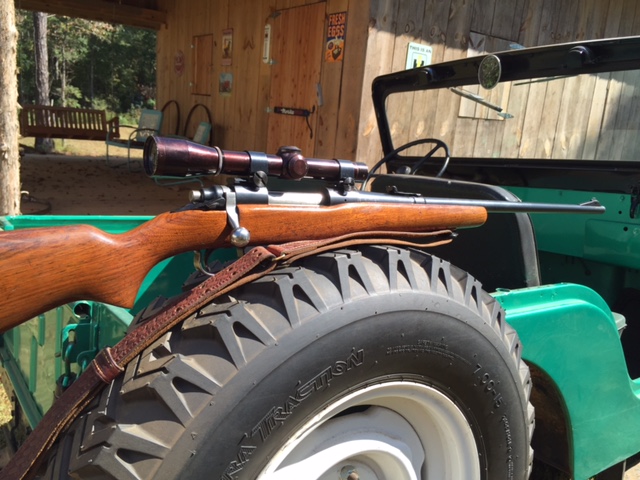 I drove a 1969 yellow Dodge Dart all through college.  It had a standard shift on the column, no air conditioning, no power steering – it was a plain car.  But when you stepped back and looked at the old car, she was downright pleasing to the eye.

I have found that rifles are the same.  Personally, I prefer walnut and blue steel.  Now, I don’t want to throw off on many of the fine plastic guns on the market.  These rifles represent the norm of hunting today and many of my close friends use them – they are just not for me… most of the time.  They also remind me of modern cars… can’t tell one plastic one from the other.  But make no mistake, the younger generation, the Millennials, like plastic stock rifles.

I want to tell you about two old, plain… some say gangly… beautiful rifles.  Without a doubt, I love and admire the classic fine lines of a Winchester pre-64 Model 70, or the 6.5 x 54 Mannlicher Schoenauer, and the beautiful custom stocked Springfield Sporter… but there is something quite wonderful and special about a few old, plain rifles that time has turned into real pearls.

My first deer rifle was purchased in 1974.  I was in college and had no money and borrowed $120 from my father.  I was now the proud owner of a Remington Model 788 in 308 Winchester!  A poor man’s rifle, a beginner’s rifle, right?  How wrong!  I first learned to shoot the 788 using the rifle’s sights.  The following Christmas I received a Weaver Marksman 3-9 scope.  Now I had a real rifle!

The 788 produced wonderful groups, even in a day when many shooters, including me, didn’t use hearing protection.  It didn’t take long for me, as well as thousands of other owners, to realize that the 788 was pound for pound as accurate… and maybe more accurate… than the Remington’s starship model, the 700.  So accurate a rifle with such a fast lock time that it did not take long to find the 788 in long-range competition.

Now, some critics scoffed at the rifle’s plainness.  It came with a birch stock, uncheckered, and some made a big to-do over a weak bolt handle that was brazed on and a bolt that had the locking lugs (9 of them) on the rear of the bolt.  But this is a fact and trust me… the Remington 788 is one fine, great hunting rifle!  It has taken game all over this land from thousands of riflemen and if you dare Google it, you will find it has, like our next plain-Jane rifle, a cult following.

My 788 was stolen out of my son’s truck many years ago in Tampa, Florida.  My son and I mourned the loss of my first rifle.  Nine years later my beautiful wife Kathy found a Remington 788 in 308 Winchester in a gun shop in Massachusetts.  She purchased the rifle and surprised me with it on Christmas.  Now listen, I called the gun shop thanking the owner with his help and found out the rifle was never fired.  It belonged to an estate and get this… when I Googled the serial number, it was made, you got it, in 1974.  The good Lord restores what the locust have devoured!

The rifle came with an old Weaver K-4 scope.  I took the old rifle out to the shooting bench and found it to be extremely accurate in spite of a heavy trigger pull.

I love old rifles and old scopes.  I just can’t for the life of me put a brand new moon-powered scope on a vintage rifle.  I should, however, because the old rule of thumb is to spend more money on the scope than the rifle - and it’s true.  But a beautiful vintage rifle needs a vintage same-era scope.  Now with saying that, the K-4 Weaver was one fine durable and well-made scope.  So is the new Weaver K series.  The old K-4 and the old 788 has put a lot of venison in our freezer.  It does have its faults…the clip rattles and the birch stock seems to take on dents.  In certain conditions, the scope may have a glare issue… but man does it shoot well!  There is something else… when you pull a trigger on a deer, bear, caribou, elk, or moose with a vintage rifle and scope… well… that’s very, very special.

The Remington 788 was made from 1967 to 1983.  It was targeted to compete with competitors less expensive rifles.  It was chambered in .222, .223, 22-250,243, 6mm Rem, 7m-08, .308, 30-30, and 44 mag.  It had a single stack detachable clip and it stood out because the locking lugs were in the rear of the bolt.  The bolt had a very short throw and the lock time was real fast!  As I stated before, critics have attacked the 788 as inferior to the 700 and others due to the bolt being brazed on and the rear locking lugs.  I have never witnessed a broken bolt handle, or have I ever seen head space issues due to the rear locking lugs.  Now, I would keep all loads to factory specs.  The lugs are in the rear of the bolt, and if you don’t hotrod your loads, the rifle will last many life times.

My friends, the Remington 788 is getting more expensive and harder to find.  To me, it is a plain and beautiful rifle that can still be depended on to be a workhorse in the field.

Now… let’s talk about the next plain and pleasing rifle.  This plain rifle is to me a thing of real beauty.  Its lines are lovely, long and are as pleasing (at a distance) as the elegant, classic Winchester pre-64 model 70.  This beautiful, plain rifle is the Remington Model 721.  Like the 788, my model 721 was also a gift from my wife Kathy.  She found the old rifle in Pennsylvania.  This 721 was made in 1953 and sports a 60’s-era Leupold M8-3X straight-tube scope.  There is not one ounce of checkering on the walnut stock……the trigger guard and floorplate are stamped steel – but hold this rifle in your hands and “Wow!”  The 721 has a very, very strong bolt, and a fine barrel with rifle sights, which is rare today.  My old rifle is chambered in the rugged workhorse of .270 Winchester.

Critics of the 721 say the bolt extractors are weak and cannot be replaced because… there ain’t none!  But I have found that fear way down on the list of problems to worry about. Now with saying that, mine stopped extracting cases last year.  My first thought… “They were right - bad extractors!”   But my good friends at Peterson Gun Shop, in Mt. Dora, Florida, expecting to replace the extractor, found the chamber just needed a good… “real good” cleaning.  Now she extracts the empty cases just fine.

Not long ago I went to a shooting range and brought the old 721…and before long, many of the shooters that were sighting in various expensive plastic rifles…soon began to meander over to my bench.  They fondled the old rifle and began to shoot up my ammo.

My friends, like the 788, the 721 has a cult following.  They have been used by the likes of the famous Robert Ruark and Harry Selby in Africa, and by the likes of the common man like me and thousands more who have found it to be reliable in function and has taken game in this country and in lands all over the world.  Folks… the Remington 721 is historically one our finest rifles ever made.

Is it beautiful?  Oh yes!